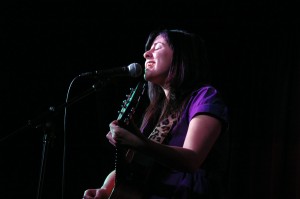 You probably would not take your parents to see her perform. In fact, she did not even let her biological parents hear any of her “funny songs”.

If you did not understand English you would swear Nikki Lynn Katt (pictured) was an angel singing. But when you understand her, it’s a much different story.

She seems to know this. “I think that my songs make people think that I’m not exactly marriage material,” she told Newsbytes after her kick-off gig in Brisbane.

So what do they think? “They do think that I’m fucking material – which I’m not into because really when it comes down to it I want marriage, babies and a white picket fence.”

Why do they think that? Katt’s pink business card is adorned with butterflies and a rainbow. But it deserves a second glance. The card reads, “Comedian, Musician, Vagina Model”.

The American is on her second trip to Australia for a three-week tour. She performed at the Sit Down Comedy Club in Paddington with compatriot Sam Tripoli. In her luggage is Ginger – her guitar – a few changes of clothes and songs like Heartbroken Vagina. She even brought some community service announcements she sings for high school students back home.

“If I were going to be an STD, I’d want to be herpes,” she sings. Herpes, she claims, is the less serious of sexually transmitted infections, and mainly harmless. The teachers wouldn’t agree.

Nikki Lynn Katt floats in that grey void between comedian and musician. On stage with her guitar and minimal banter between songs, she is good at both.

“Yeah, I actually started out doing serious music and I actually went to Berklee college of music in Boston, and got in for serious songs. I was a song-writing major and I got in for voice, but switched to guitar and I didn’t even know my songs were comedy songs.

“People liked my funny songs better than they liked my ‘slit-my-wrist’ songs so eventually after enough people told me I was a comedian, including my grandfather, I was like, I guess I should try a comedy club.”

Audiences take a while to warm up to her act. The modestly dressed Katt says this is particularly the case in Australia.“ I don’t think that people in Australia realise that they have permission to laugh during the song,” she said.

Her name is not completely accurate. “It’s a stage name – I also do some work in non-profit so I keep it separate,” she explained to Newsbytes. Audiences would be surprised to know this.

What about the future? Katt sees herself falling into a similar position to Arj Barker who is probably better known in Australia than the American homeland.

“I think in LA the comedy clubs don’t quite don’t get me and music venues kind of do, so I think it’s a thing where I have to create my own event and write my own ticket… whereas in Australia they seem to embrace music more even though in comedy clubs it is not as common but, you have radio songs that are comedy songs so it’s an interesting balance.”