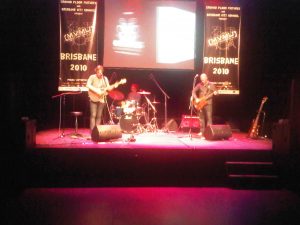 Brisbane’s world premiere Music Video Mash Up Competition came to a close last week as winners were announced at the Brisbane Powerhouse.

The competition began on April 30 when 19 local bands and young filmmakers were randomly paired together and given three days to create a music video.

The videos were revealed at the UQ Schonell theatre on May 10, where a crowd of 300 voted for the best video.

MVMU organiser Dorian Ribeiro said all filmmakers and bands did a fantastic job.

“I think everyone did absolutely amazing stuff, I think it [the competition] has created great working relationships,” she said.

The MVMU awards were split into ten category awards: five awarded to musicians and five to filmmakers.

Joel’s video Smoke and Mirrors, produced by Enjoy Productions, will be broadcast nationwide on Video Hits.

Joel Myles said he was very excited and agreed that the competition brought together friendship groups.

“I’m very proud of people that I worked with and I think that I was very lucky to be paired up with a such a talented group of filmmakers who are now my close friends, ” he said.

“I’m very excited about my video being broadcast although it hasn’t really sunk in yet,” he added.

Project manager at Brisbane City Council Athol Young said the competition had the full support of the Council.

“This competition has put young musicians together with young film makers. It’s also a great way for the Brisbane City Council to show their support for young people in the creative industry,” he said.

All winners won a share of $12,000 in prize money and work experience.

Some of the major sponsors included Allans Music, Kodak, Video hits and the Brisbane City Council.

The Brisbane City Council refused to tell Newsbytes how much funding the council contributed.