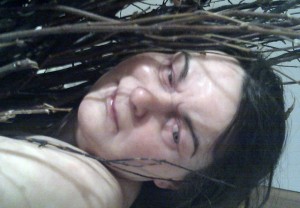 “A Girl” is Ron Mueck’s scuplture of a nude newborn baby complete with blood smeared on her body and a purple-blue umbilical cord still attached. The baby is quite ugly, suggesting a challenge to the idea of beautiful and innocent childhood. This sculpture is of no innocent, but of a primal force of nature.

One is reminded of how babies take over the life of new parents totally and utterly: in the same way that the baby is everywhere in their lives, this baby dominates the space around it and is impossible to ignore. The sculpture is enormous; four and a half metres long and about a metre high. A dozen real life babies could sleep on top of this sculpture with room to spare.

“Woman with Sticks” (detail, above) jumps forward to middle age in the life of a female. This poor woman is bent under the burden of the load of sticks she carries, perhaps symbolic of all the burden women carry for others throughout their lives. Not only is her body small (she is less than a metre high), she is also small compared to the size of her bundle.

Unless one comes close to the sculpture to really examine the flabby-skinned but strong-muscled nude figure doing the work, all one can see is what she carries, half-masking her humanity and individuality. When one does examine the woman, her face seems kindly but has a look of mute resignation, as though she is not only resigned to her fate but cannot imagine any other.

Perhaps such a life of constant heavy work helps to bring out the nastiness and cruelty evident on the faces of “Two Women”, another sculpture less than a metre high. The two old ladies in this one seem to be gossiping together, probably enjoying being outraged by the loose behaviour of some local girl. As they gossip their eyes peep about the room, maybe to see something else to be angry about.

One feels a gut-level dislike for these two women; they seem a vicious pair of old wowsers, ready to rip apart the reputation of anyone who transgresses their reactionary moral code. But when seen in combination with Mueck’s other two representations of women, perhaps one should understand what can mould a young baby into this sort of judge; a life lived under constant exhausting toil won’t bring out the best in anyone.

“A Girl” is one of the drawcards of the Ron Mueck exhibition. Dane Beauchamp of Albany Creek said he came to the exhibition because he saw a photo of the work in the Courier-Mail. He said the size and lifelikeness of the sculpture inspired him to come and see it, the first time he had ever come to see an art exhibition. Louise Holman of St Lucia also said “A Girl” was the piece she found the most striking.

The exhibition had strong attendance on Sunday morning, with more than 50 people already inside before 10.15am and at least another 70 people queueing for tickets by 11am.

The Ron Mueck exhibition is at the Queensland Art Gallery’s Gallery of Modern Art, Southbank, until August 1 2010. 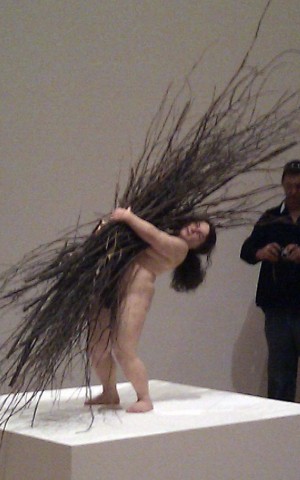 Above: Woman with sticks