Move to ban sales of pets from shops 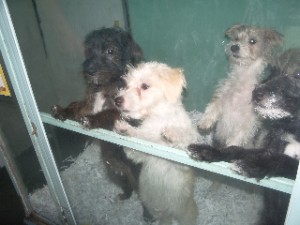 The Pet Industry Association of Australia said a petition calling for the sale of cats and dogs to be banned in pet shops was poorly researched and unfairly targeted retailers.

An e-petition before the Queensland Parliament is calling on the government to prohibit the sale of household pets in stores on the grounds it is inhumane and cruel.

“The number of animals from pet shops being euthanised is very minute,” he said.

“Less than 10 percent of cats and dogs in this country are sold in pet shops.”

Mr Westaway agreed the plight of unwanted animals was a major concern for the industry but said tougher regulations were needed to weed out rogue breeders.

“All pet retailers have to follow a very strict code of practice but a bulk of sales come from print, internet sales and private breeders,” he said.

“If you don’t have an industry body to go to it’s hard to regulate against it.”

RSPCA Queensland spokesperson Michael Beatty said while he agreed with the general principles of the petition, the solution was not to ban pet shops.

“We believe the only clear step forward is to make de-sexing mandatory at point of sale for all but registered breeders (of cats and dogs) and there would also be an exemption for working dogs used on properties,” he said.

“While there would obviously be some policing headaches it would actually be no harder than policing normal dog and cat registration.

“What we need to do is close off completely the markets that currently exist for puppy farmers. If no animal was able to leave their farm without being de-sexed their profits would be decimated.”

But Mr Westaway disagreed and said these measures would raise legal issues and the rights of legitimate animal owners.

“There certainly are some arguments between veterinarians about mandatory de-sexing of young animals – there are some conflicting views,” he said.

“It can have an adverse effect.

“The PIAA are working very hard to lift the standard of our industry. Pet shops are part of the solution not the problem.”

RSPCA Queensland currently sells de-sexed, micro-chipped animals through its World for Pets store and a number of selected Pet Shops.

The e-petition is available on the Queensland Parliament website (www.parliament.qld.gov.au) and will be tabled in September. At time of publication the petition had 884 signatures.

One Response to “Move to ban sales of pets from shops”