Wide blue skies, a windmill atop ochre coloured hills, and the token sheep of an outback station set the opening scene of the QPAC production The Elixir of Love firmly in Australian territory. The light-hearted opera, written in two acts by prolific Italian composer Gaetano Donizetti, premiered as L’elisir d’amore in Milan in 1832.

This lively production of the universal story of love overcoming class division, with a bit of assistance, has been cleverly adapted to appeal to a wider, typically Aussie audience.

The joyful romantic comedy, laced with patriotism and created by Simon Phillips, features the Queensland Orchestra and the Opera Queensland Chorus, energetically conducted by Graham Abbott. Bass-baritone Andrew Collis is superb as the self-promoting, shady quack Dr Dulcamara. The encyclopaedic doctor is aided by his bumbling, hip flask-nipping sidekick.

While performed in Italian, the tongue-in-cheek tone of the embellished, projected translations gives this production a uniquely Aussie flavour. Operatic novices and a younger audience will gain an understanding of the script through the subtitles. While enhancing the comedic aspect of the production, the translations could be described as lingo as opposed to literal, perhaps leading to a raised eyebrow with opera purists. The audience may have difficulty reading the subtitling as the lighting is not very bright; the words are projected high above the stage making it difficult to take in the scene and words simultaneously from the stalls.

The conductor is to be admired for his control of the timing and tempo; all three units performing are dependent upon him for direction. The music provides the emotional barometer by which the appropriate mood is set, with the musicians playing a huge part in the success of this opera. When the artists sing unaccompanied, the lack of music adds to the impact of the song 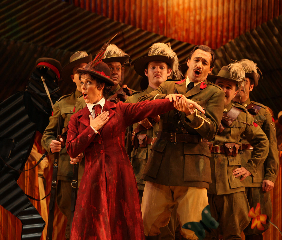 By singing towards and appealing to the audience to invite participation, the cast court interaction with the viewers. The interplay between the cast and the music is integral in upping the ante when it is required and vice versa — rolling crescendos build up and alternate with gradual decrescendos, as prescribed by the particular piece in the opera.

There are many memorable song sequences in this entertaining opera. The chorus are responsible for many rousing moments, as when they literally sing the doctor into town. Nemorino (Marino) sings the famous aria “Una furtiva lagrima” (A furtive tear) upon realising that the potion has worked.

In the memorable chicken coop scene, Gianetta (Burke) sings a beautiful solo. Adina (Jones) and Dr Dulcamara (Collis) have good rapport and sing a lovely duet where he attempts to convince her to use the potion. Adina delivers a beautiful song when she appeals to Nemorino near the end, swearing her love as he in turn draws it out, pretending self harm. There is some beautiful harmonising between them and she demonstrates her vocal range with the delivery of a well executed cadenza.

The principals make use of exaggerated gestures and posturing to get the message across, to draw a laugh while enlisting audience support. Belcore really makes a show of proposing on bended knee and emphasising his difficulty in doing that! Gianetta tries to seduce Nemorino, dramatically hanging onto the wire mesh of the chicken coop to make her point! Adina violently swats imaginary flies as she lies on her picnic blanket, reading the love story of Tristan and Isolde.

Far from opulent, the set remains true to the rural, outback location; the appearance of corrugated iron is ingeniously used in the construction of hills and animals, anchoring the production in its rural setting. Set designer Michael Scott-Mitchell uses minimal, simple set arrangements which extend the expansive outdoor theme. The use of silhouettes growing ever larger as they approach from upstage is a clever one and adds depth to the stage. The chicken coop scene with the hung crescent moon is astonishingly simple in its execution but very effective, containing the village women as a unit, focussing the attention of the audience and centring the action.

Costume designer Gabriela Tylesova allows the clothes to successfully speak for their wearers. She keeps the clothes of the chorus fairly uniform with neutral and muted earthy tones of khaki, pale apricot and cream aprons and straw hats for the women. Clothing is generally simple and fits the outback theme; male chorus members wear Aussie hats and farm clothes.

The soldiers are caricatured in jodhpurs, green jackets and ammunition belts. Belcore, resplendent in boots and needing to assert himself, carries a whip to highlight his masculinity. The garish purple and lilac outfit of the sly doctor, finished with debonair black and white wingtip shoes, reflects his colourful character. His eccentricity is underlined by the over the top yellow waistcoat and umbrella he wears when he makes his first appearance. The simple white dress sparsely decorated with flowers that Adina wears towards the end allows her to stand out from the general cast, appearing feminine, genteel and refined. The festivities of the party scene are complemented by the cheerful addition of flowers to the hats of the women.

In the end, Nemorino is rewarded with Adina’s capitulation and the elixir of love is much in demand; in a slightly jarring twist that perhaps smacks of commercialism, a large canned drink dispenser decorated with what looks to be part of the Coca-Cola logo appears on stage — the doors are flung open and — yes, Coca-Cola bottles are revealed and dispensed!

This entertaining, funny, light-hearted opera is energetically presented and wholeheartedly enacted; the orchestral music enhances the show and there are some memorable songs and voices. While opera aficionados will take pleasure in it, it is a great operatic appetiser for the first time or younger opera goer. Bravi!