Queensland Liberal National Party defector Aidan McLindon today released details of a volatile disciplinary meeting in which he claims he was ordered to pay $12,000 to the LNP secretariat and had to face “abusive and intimidating confrontations”.

Mr McLindon, MP for Beaudesert, said the meeting occurred in February as a result of his disparaging comments in the media about deputy leader Lawrence Springborg, and a failed tilt at the deputy leadership.

He tabled documents in Parliament including a statutory declaration that alleged LNP state treasurer Barry O’Sullivan swore repeatedly and intimidated him during the disciplinary meeting.

Mr O’Sullivan was quoted in the statutory declaration as having said, “I have never been so fucking angry in my fucking life, and you’re lucky you’re still fucking here you little shit.”

Mr McLindon said the meeting resulted in a slew of penalties against him for speaking out against the party, including a requirement he sign a contract to join a marginal seats campaign committee at a cost of $12,000 of his taxpayer-funded electorate allowance.

“I refused to sign the contract as I was deeply concerned about the legitimacy of what I was being directed to do,” he said.

Mr McLindon said the sum required was later reduced to $6,990 but he could no longer put up with the pressure from the LNP secretariat and he resigned from the party.

“It is my view that what had taken place at best was highly unethical and I felt a
considerable amount of undue influence and intimidation from Mr Bruce McIver in executing my duties as an elected member of this Legislative Assembly, yet I did everything I possibly could for as long as I possibly could to remain as part of the LNP,” he said.

Mr McLindon asked for the matter to be referred to the Integrity, Ethics and Parliamentary Privileges Committee “so as to prevent this occurring again in the future to any member here in this Legislative Assembly”. 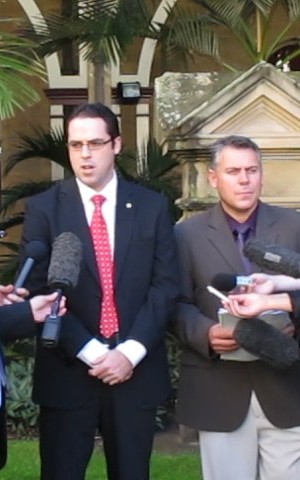 “Today we have heard even further allegations of shonky contracts being issued by the LNP leadership to members of the LNP, using standover tactics to hand over money,” she said.

She called on Opposition leader John-Paul Langbroek to reveal what he knew about contracts such as Mr McLindon’s.

“What did he know about the shonky contracts? How many have been signed?” she said.

The matter was referred to the Integrity, Ethics and Parliamentary Privileges Committee. Mr McLindon later said he didn’t feel comfortable making a comment until his complaint was resolved.

He said he would be more than happy to stand as a witness if the matter goes further, but he was concentrating on his electorate in the meantime.

Mr McLindon is among three people to resign from the LNP this month over disagreements with its leadership team.