Greens ‘ready for balance of power’ 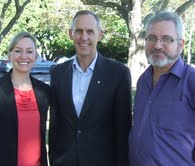 The Australian Greens are ready for the tensions of holding the balance of power in the Senate following the next election, party leader Senator Bob Brown said in Brisbane yesterday.

Senator Brown said he was experienced in managing internal party tensions arising from holding the balance of power since the Greens-ALP accord in Tasmania in 1989-90.

He said he would prefer the tension to being forced to vote for things he did not support.

ABC election analyst Antony Green said in January the Greens were almost certain to win the balance of power in the federal election expected later this year.

Senator Brown said he was often approached by ALP and Coalition MPs who said they agreed with the Greens but were not willing to break party discipline to vote with them.

Ms Waters, who came about 60,000 votes short of winning a Senate seat in 2007, said the extra votes she needed to win a Senate seat could come from ALP voters disappointed with Prime Minister Kevin Rudd on climate change, refugees and indigenous issues.

She said the most important issues facing Queenslanders were climate change, creating renewable energy jobs and funding for public health and education.