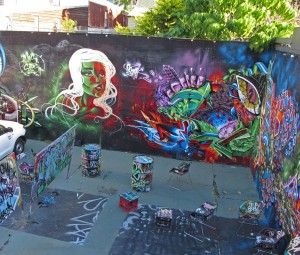 A wide-smiling judge in flowing wig with uplifted gavel, and a square-eyed skull leering through the greenery are just two of the larger than life images tagging the building site of Brisbane’s new justice district.

Projects Engineer Raquel Tudor said that they were advised to contact Jugglers Art Space, based in Fortitude Valley to get the artwork done.

“It is the first time that we have done something in an area that has such a high amount of pedestrian traffic through [the vicinity]. We have also not had this amount of hoarding before. We contacted Jugglers as we heard they facilitate up and coming street artists, “Ms Tudor said.

“From a community engagement perspective, we had lots of space and there are lots of street artists who don’t have the space to do their work. We are providing exposure for the artists as well as adorning our boring boards.”

Construction on the multimillion dollar legal project began in October 2008. Scheduled for completion in December 2011, the new court block covers an entire city block between George, Roma and Turbot streets.

A group of nine talented artists worked at the site on a Saturday morning in March. All were paid for their work. Renowned freelance artist Shaun Campbell, aka Squidtank, was contacted to participate in the mural by Jugglers.

Ms Tudor said the Taskforce against graffiti (Tag) team was informed before the planned art event. This is a joint collaboration between local and state government who work in conjunction with the police. A Council spokesperson said Council does not support legal street art and aerosol. Council refers those interested to Jugglers Art Space and The Fort Arts Hub. Based in Brunswick Street, Jugglers Art Space was formed in 2002 by Peter, Randal and Harley Breen and Phil Lock. Mr Breen is a radiographer, former church minister, counsellor and artist and explained the rationale behind Jugglers as creativity, social justice, spirituality and the search for meaning and community.

“There are three elements to our philosophical base. The first comes from the belief that positive creativity is a basic human reality,” he said.

“Secondly, we try to affirm street art style while establishing the medium of aerosol art. Thirdly, the three ‘E’s’ of engagement, eradication and education [are integral to our work].

“Law and order are very good at the eradication part, and we see our role as engaging with young people and the public while educating both sectors to be able to view street art as a legitimate expression of creativity.“

“As part of our community involvement, the special circumstances court in Brisbane also refers young men to us for supervision. 99 percent of illegal street art is done by young men.”

“We are known for our advocacy for the street art scene but we are not primarily about graffiti. We engage in public murals for Queensland Rail, running the Brisbane Artist Run Initiatives Festival (BARI), monthly exhibitions and providing subsidised art/music studios are part of the mix,” Mr Breen said.

The Brunswick Street base of Jugglers has a legal space dedicated to street art incorporating an alleyway and courtyard open to street artists, both adorned with amazing creations.

Fronting the rail line into Brisbane Central near Roma Street Parklands is a colourful mural depicting bright blue hummingbirds and vibrant lilies against a lilac background, an example of Jugglers’ public art.

The KPG construction site at the old gas works in New Farm is another site that was decorated by artists associated with Jugglers.