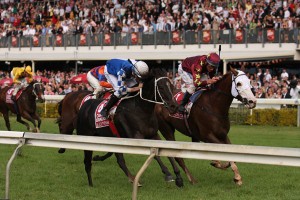 Despite fierce objections from the Liberal National Opposition, a Bill to amalgamate control of the three racing codes was passed in State Parliament on Thursday.

The new law will place the horse, harness, and greyhound racing sectors under one legislative body. It also lets the Government claim a portion of assets sold by racing clubs.

“This is the most ill-conceived, illogical and deliberately destructive piece of legislation that I have seen come into this House during my time in this parliament,” he said.

He said the legislation did not fit with the Labor Government’s previous commitment to keeping the three sectors of the industry separate.

“What is strange is that throughout the history of legislation changes in racing, Labor has continually preached the importance of keeping management of racing within the hands of the three control bodies,” Mr Stevens said.

“Now suddenly it wants to concentrate the power of all three codes into one control body.”

But the sponsor of the Bill, Minister for Tourism and Fair Trading Peter Lawlor, said the amendments to the Racing Act would protect small country racing clubs.

One changes requires the control body to use 5 percent of any remaining turnover to support non-TABQ thoroughbred racing.

“That will be the requirement of the control body and I think it will give some security to country racing,” Mr Lawlor said.

The Bill also requires the control body’s chairman to offer himself or herself for re-appointment every two years.

“This clause is also designed to protect small country racing clubs,” he said.

Labor member for Keppel Paul Hoolihan said amalgamation of the racing codes would benefit many of those working in the industry.

“This Bill protects employees earning under $100,000 and transfers staff, assets and liabilities to the new control body from the harness and greyhound control bodies, which actually own those assets,” he said.

Townsville member Mandy Johnstone said despite fears of club assets going into the government’s hands, clubs still controlled decisions over where assets would be directed.

“It is the club that first has to make the decision for itself should it choose to dispose of its assets, and the minister responsible for racing will then make an assessment of the club’s request,” she said.

But LNP front-bencher Vaughan Johnson said there was no guarantee of country representation on the new board.

“There is going to be a centralised board that will not have any consideration at all for those smaller clubs outside the south-east corner.”