Gen Y waiting to get into Godot 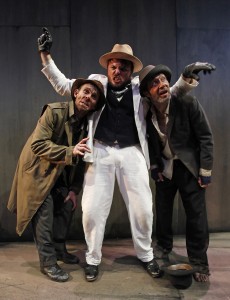 The play is a dense absurdist drama about two characters waiting on a desolate road for someone called Godot, who (plot spoiler!) never arrives.

Queensland University of Technology Drama Discipline Leader Dr Christine Comans said this week the play combined philosophy with comedy and humour in a way that was still engaging for young audiences.

“It’s a play that is very, very funny and a great comment on the human condition,” she said.

The Brisbane production, directed by Joseph Mitchell, is targeted at students who are studying the play.

Jonathan Brand, who plays Pozzo, said although he had been worried about how students would react to the play, the run was proving a success.

“Audiences have been really receptive,” he said.

Although the play was a difficult text, students were engaging with it well.

“It’s not going over their heads. The themes, even though they’re huge, (the students are) really kind of embracing them,” he said.

Brand, who is a former high school drama teacher, said students got things from studying plays that they could not get from traditional subjects like maths and science.

“Especially texts like Godot. They’re questioning religion and existence and people in general. You don’t get that sort of questioning in other subjects,” he said.

Each production of the play is followed by a question and answer session, where the students have an opportunity to discuss the play.

“I think the one that always pops up is ‘Who is Godot?’ and it’s such a tough question because I think it’s up to the interpretation of each individual,” Brand said.

He said the central message of Waiting For Godot was one of hope.

“I think for me, Godot is a symbol of hope. If it wasn’t for Godot, they would just be two men on a road. They’ve got this hope, which is why they wait,” he said.

He said it was a timely message for the youth of today.

“There’s a lot of upheaval at the moment with the GFC and even going back to 9/11. It makes you question why we’re here, what we’re doing and where we’re going,” he said.

Waiting For Godot is playing until May 7 at the Bille Brown Studio.