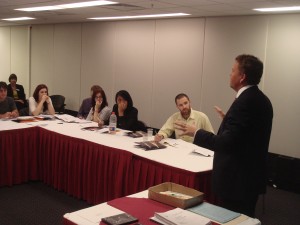 The resignation of two MPs will make it more difficult for the LNP to win the next Queensland election, Member for Indooroopilly Scott Emerson said today.

Mr Emerson said the lack of LNP numbers would prove difficult for his party to gain power. It meant the LNP had to win two more seats.

“Obviously it affects us. We had 34 members and now we need 45 to win a majority,” he said.

“Those two leaving does not help us get rid of Labor and if judging by the polls people want a change,” he said.

While disappointed by the defection Mr Emerson said the decision was better for the party in the long run.

“To be honest the two members that went were causing a lot of problems within the party,” he said.

Ms Richardson, who was unsuccessful for the LNP in Barron River at last year’s election, said she would meet the two maverick MPs to discuss joining their co-operative of independents.

But Mr Emerson said the MPs’ proposal for a loose coalition was no threat to the LNP.

“I’ve never seen a government made up of independents,” he said.