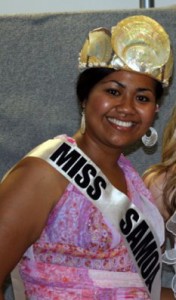 Young Australian-born Pacific Islanders are losing their connections with their parents’ homelands according to Pacifika Festival president Caroline Crichton. The Pacifika Festival held at Deception Bay yesterday was designed to help young Islanders explore their heritage and identities.

“I think that a lot of the older generation have come to Australia and thought that it would benefit their children to learn English, but along the way they’ve lost their roots,’ Ms Crichton said.

“This festival provides the opportunity for the kids to learn how to dance and learn how to sing. So they can see where they all came from,” she said.

Many did not know the meaning of the popular Samoan “manhood” tattoo, traditionally tapped into the skin using a sharp combs.

Michael Hunt, a 19-year-old Pacific Islander who had the tattoo done on the day, said he was proud and honoured but he was not sure what the tattoo meant.

Former president of the Panpacific Oceania organisation Samataua Hanamenn Hunt said the loss of culture was an important issue for young Pacific Islanders.

“I think it’s a real issue. There is a big gap and we need to make more of a connection and do workshops and focus groups for young pacific islanders,” he said.

“That is why events like these are held. To reconnect with the younger generation.”

“I really think that it is up to the individual. It is really up to the person if you really want to find out more about your heritage you should actively search,” she said.

“We can’t pinpoint where the problem is and we shouldn’t be finding people to blame, we should be finding a solution to bring back the culture into the lives of the kids,” he said.