Dogmatic councillors argue over who cleans up the mess 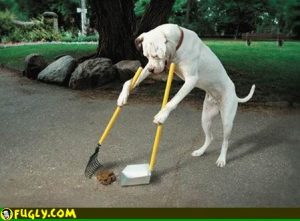 Pooper-scoopers became the subject of debate in a slanging match at yesterday’s Brisbane City Council meeting.

It all began over who should take the blame for a simple Brisbane residential mapping error.

The properties – 420, 426 and 428 Hamilton Road – were incorrectly included in the Residential Precinct instead of the Gympie Road North Precinct.

Although the debate raged on, the public had already been notified of the intended changes to the map in the Courier-Mail on 5 March.

The Lord Mayor went as far back as 1978 to blame Labor Lord Mayor Frank Sleeman, who died in 2000, for his council’s incompetence.

But Cr Sutton was quick to point the finger at the chairperson of the Neighbourhood Planning and Development Assessment Committee, Cr Amanda Cooper.

Cr Cooper in turn said the mistake was made under Labor, but the current LNP administration had to fix it. She said she was the one who had to clean up Labor’s mess with a pooper-scooper.

“If she’s bringing in the pooper-scooper to clean up anyone’s mistake it should be her own,” said Cr Sutton.