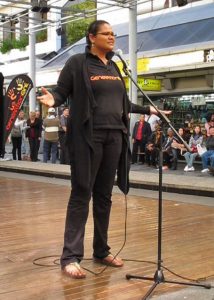 Kokoberra woman and former Young Australian of the year Tania Major called for a better deal for indigenous people at the Brisbane launch of Generation One in Queen Street this week.

Ms Major appealed passionately to the patriotic fervour of all Australians to acknowledge the plight of Indigenous people.

“For so long in Australia, the fate of black people has either been a black problem or a government problem — in fact, it’s an Australian problem,“ she said.

“I am sick and tired of the black and white issue, the ‘them and us’ mentality. We’re all in it together and we’ve got to face this,” she said, challenging everyone to change their negative perceptions of Aboriginals.

Billed as a road show, proceedings were opened in song by elder Maroochy Barambah. The program included speeches, music and hip-hop dance.

The campaign aims to reduce gaps between indigenous and non-indigenous communities through education, mentoring, jobs and job-ready training. Sir Bob made a plea for inclusiveness through education.

“Society can’t be coherent without the participation of everyone in it,” he said.

“It doesn’t matter what colour you are, that’s a ridiculous proposition to make one person lesser or disenfranchised because you happen to have a different skin colour.

“The way to do it is through education, because when you are educated you remove yourself from tradition, but not your culture, just your tradition and then you access modernity. That’s what has to happen, education and then the jobs.”

In a short, self-deprecating speech Mr Forrest spoke of growing up with Aboriginal people, in particular his relationship with his late “brother” Ian Black.

He said he was moved to “do something” by his children following Ian’s death last year. “This is our time where we know indigenous people as a raw and horrible statistic. Only 25 percent make it to the age of 65. In all other Australians, it is 75 percent who make it to age 65.

“That huge gap is what we are here as Queenslanders and Australians to nail through education, employment and training.”

Saying the term “Blackfella” is one “of great pride, it’s a name that describes the oldest continuing culture which exists in the world”, Mr Forrest encouraged indigenous Australians to take the opportunities being offered and to “demand from our government, training that matches jobs, education that matches training and the will to send our kids to school”.

In her impassioned speech, Ms Major asked all Australians to stop judging black people, put themselves in their shoes and do away with racial stereotyping.

“We do want to play our rightful role in this country, we do want to step up, you can’t ignore us,” she said.

“We are a lucky country. I am sick of the negativity that’s portrayed around Aboriginal culture. We are a proud people and we want to share with you who we truly are. Service to humanity and contribution to our society is the fundamental core to being Aboriginal.”

Saying that Generation One is “about paying it forward”, her rousing speech stirred the crowd. She said Aboriginal people deserved choices and opportunities while Australians needed to come together to make those dreams a reality. “We cannot sit back and watch this in our own country,“ she said.

She was joined by popular country singer and songwriter Melinda Schneider, who teamed up with indigenous rap artist Brothablack and the Brisbane chapter of the Australian Girls Choir to sing the anthem of Generation One, “Hands across Australia” in a stirring rendition. Mr Forrest and academic Chris Sarra made a guest appearance in the song.

Brothablack said he “was an early high school leaver” who is now employed full time by the Department of Education and Training in Sydney.

“A solid education is a solid future” is his message to youth. He said the road show had been a great journey and sees his role as a “positive avenue, not a tokenistic representation” having learnt racial tolerance growing up in the multicultural society of South Western Sydney.

Choir administrator Erin Kinlyside said the choir was really excited to be part of the initiative and had recorded a song called “Courageous” with Melinda last year.

The road show started in Sydney in March and has visited about 25 centres throughout Australia. This version ends tomorrow in Coffs Harbour, said tour manager Nina Stanwell. Ms Major was joined in her role as spokesperson for Generation One by high achiever Jack Manning Bancroft, CEO of the Australian Indigenous Mentoring Experience (AIME). Jack is the NSW Young Australian of the Year 2010.

For more information, check out www.generationone.org.au and www.brothablack.com for insight into the views of a young Aboriginal man.