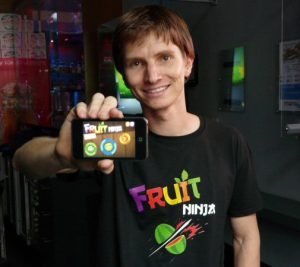 An iPhone game from Brisbane developers has become an international success story, despite an industry ravaged by the global financial crisis.

Fruit Ninja, by Brisbane developer Halfbrick, has shot up the iPhone charts and become one of the top three most downloaded paid apps in more than six countries only a month after its release. It’s had more than 200,000 downloads.

Fruit Ninja creator Luke Muscat (pictured left) said he was elated by the success of his brainchild, in which players use a sword to slice through flying pieces of fruit and avoid deadly bombs.

“It just turned into this big whirlwind that was out of our control. It was really fantastic to see,” he said.

He put the success of the game down to its simplicity and accessibility for casual gamers.

“It’s nice and quick and casual,” he said.

“So many people have an iPhone and they’re not necessarily a gamer.”

The success of Fruit Ninja comes amid tough times for the industry in Brisbane, which has recently seen the closure of two leading developers while another studio shed 50 employees.

“There used to be a few more developers than there are now. Now there’s only a handful,” he said.

Video games expert Daniel Johnson of the Queensland University of Technology said some local developers were shining, despite the financial setbacks to the industry.

“Brisbane is doing reasonably well in that climate,” he said.

Dr Johnson said new platforms like iPhone were opening doors for smaller studios such as the Binary Mill, developers of AAA Gun Club.

“They have had great success with their Gun Glub app,” he said.

But he believed Brisbane developers often put their own ideas on the backburner because they relied on money from contract jobs.

Mr Larsen said studios should develop their own intellectual property to ensure longevity in a competitive industry.

“If you’re a developer who’s not started already branching out into your own projects through digital distribution you’re going to be in trouble,” he said.

“There’s a lot of competition and you need to provide something unique.”

Mr Larsen said the State Government provided a lot of support for games studios and had recently provided funding for Halfbrick to attend the 2010 game developers’ conference in San Francisco.

“They paid for a hotel suite where we could meet with the press and they put on functions for us and they offer a lot of support in a lot of different ways,” he said.

He believed the government should continue to support the industry by providing opportunities for Brisbane developers to go overseas to promote themselves.