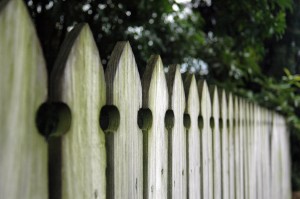 Neighbourhood rows about fences and overhanging trees are set to be reduced following tabling of proposed laws in the Queensland Parliament.

“We have modernised the outdated laws regarding dividing fences, which were introduced almost 60 years ago, to ensure they are more applicable to life in Queensland in the 21st century,” Mr Dick said.

Changes to the Bill include an updated definition of “dividing fence”, a framework for dispute resolution and the appropriate forms, and a role for Queensland Civil and Administrative Tribunal to judge disputes.

People will be required to trim trees that overhang their neighbour and if a “tree keeper” does not trim the tree the neighbour is allowed to do it and recover reasonable costs.

But under the proposed changes, the tree-keeper does not own the branches, roots or fruit encroaching on a neighbour’s land.

Property Owners’ Association of Queensland president Bruce McBryde said although he was not familiar with all the changes in the Bill, he would support any changes that protect land owners’ property from damage from neighbours’ trees.

The Resolution Bill is a result of the Review of Neighbourly Relations launched in 2007.

A government survey found 80 percent of respondents said they had had a dispute with a neighbour.

“Almost 60 percent of respondents reported disputes with their neighbours over a dividing fence and 56 per cent had had disputes over dangerous or intrusive trees,” Mr Dick said.

“Our centres opened 529 files on neighbourhood disputes in 2008-09. Of those files, 239 of them went to mediation and about 73 per cent of those reached an agreement.”

The draft Neighbourhood Disputes Resolution Bill can be viewed at www.justice.qld.gov.au, and citizens can give feedback until 9 July 2010.