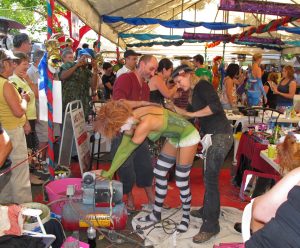 There was standing room only as intricately painted human canvasses paraded for an enthusiastic audience at the prize-giving of the “Australian Body Art Carnivale” in Eumundi at the weekend.

In its third year, the Eumundi spectacle has human body art competitions as the core of the festival’s attractions and lived up to its billing as “a feast for the senses”.

With “Fantasy” the theme, entrants in the two categories of brush and sponge and airbrush body painting competitions had five-and-a-half hours to complete their works of art.

Sign writers, make-up artists, tattoo artists and body artists made up the bulk of the 23 competitors, each with an assistant and long-suffering model, in various states of undress.

Buderim sign writer Kerry Playford said it was the second time that he had entered. He was creating a ‘futuristic warrior”.

“I am doing it for the exposure, I guess,” he said, but he quickly added he “would hate to be the model!” He painstakingly placed stencils on his hired Russian model, Janet, with the help of assistant Jenni, while he airbrushed her body a patterned, metallic silver.

Petite, titian-haired Janet, a dancer, remained good-humoured and patient throughout, taking gawking stares in her stride. Her life philosophy from Moulin Rouge, tattooed down her right side – “The greatest thing you can ever learn is just to love and be loved in return”- soon vanished under a layer of silver.

The Sunshine Coast’s effervescent Vick Pattison from “Crazy Paint” had great rapport with her model Ellen Leigh whose ebullient personality, great figure and extrovert nature made her a crowd favourite.

Her blonde-haired daughter, watching from the sidelines said, “You look very pretty Mommy!” To which Ellen replied, “Yes, it’s like being dressed but undressed!”

Inspired by Alice in Wonderland, Vick recreated Ellen as the Mad Hatter, and they made a clean sweep of the airbrush category prizes.

Judge Natalie O’Connor came from Sydney for the event.

Eumundi Gallery director Karen Beardsley said she was delighted with the way the community had come together to stage the weekend event.

Iconic “Wicked Campers” who started in Brisbane about 10 years ago, provided five campers which received amazing makeovers on-site over the weekend by artists who were chosen on the strength of their design submissions.

Organiser Danielle Taylor was pleased with the success of the weekend.

“Overall it was an amazing weekend with a very high standard of art across all sections,” she said.

“There were over a hundred volunteers involved and there was very close co-operation between the five different community groups who run the event; they are all funding partners and all worked together.”