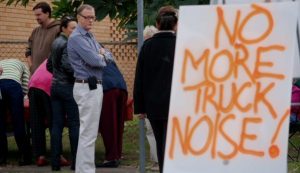 Windsor residents want the Brisbane City Council to limit construction trucks to four-tonne and place chicanes in the street to ease traffic noise during the construction of the Airport Link.

At a rally last Sunday residents said the council had turned a blind eye to major traffic noise problems in the area.

Local resident Stephen Pahl said the Council’s failure to act on the issue was, “just not good enough” and would result in a reduced quality of living for Windsor residents.

He slammed Lord Mayor, Campbell Newman and his council who declined to meet residents at the street rally.

“We are talking to them, we are bringing a genuine problem forward to them, but they are not responding. They are the untouchables, they are ignoring us,” Mr Pahl said.

Newsbytes tried to contact Councillor Graham Quirk by phone, email and personal visits to his office but he declined to comment on the traffic issue.

The rally followed Mr Pahl’s address to the council chamber the previous week where he raised the issue of excessive traffic noise from construction trucks of up to 50 tonne using Victoria St as access to the Airport Link project.

“We get hammered, six days a week, Monday to Saturday. Trucks of all sizes — they just hammer straight through down the middle of the street,” he said.

Labor Councillor for Windsor David Hinchliffe (pictured above) told the rally there was never any specific approval for construction traffic in the area and local traffic signs installed at each end on Victoria St were not enforceable by law.

“There is nothing under the traffic act that distinguishes local traffic from non-local traffic,” he said.

Cr Hinchliffe said he had repeatedly invited Cr Quirk to meet residents and explain his policy to them but Cr Quirk has refused to do so.

“The very least [the Council] owe to the people whose lives and property you are affecting is to turn up when you’re asked and explain what you’ve done and why you’ve done it,” he said.