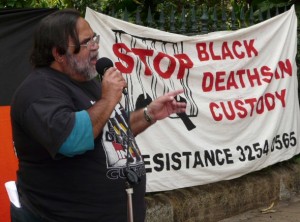 Mr Watson wants another inquiry into the Palm Island death in custody of Cameron Doomadgee, also know as Mulrunji, after the inquest, directed by Deputy Chief Magistrate Brian Hine, delivered an open finding.

He said the coroner’s recommendations did not go far enough and called for community groups to be appointed as monitors for future investigations.

“We are asking for a panel of experts to be selected from the community to monitor, in future, all death in custody cases,” he said.

“We need a truly independent agency selected from a community organisation that the community will have confidence in,” Mr Watson said.

Mr Watson called for action against police implicated in the coroner’s inquiry.

“We are calling for the five police officers who were subject to adverse findings from the HIne inquest last week be charged with offences,” he said.

The Minister for Police, Neil Roberts, told Parliament yesterday the report included recommendations and a number of findings to improve future investigations into death in custody cases.

“As police minister, I am obviously concerned at the findings which suggest collusion and fabrication of evidence on the part of several officers involved,” he said.

“I know that the Police Commissioner shares my concern, as does the broader Queensland community. These issues will, of course, require careful analysis to determine what future action is required.”

Mr Roberts said the Crime and Misconduct Commission would release its report into the police investigation of Mulrunji’s death “in coming weeks”.

“Given that this report is also expected to raise issues related to the conduct of the officers involved in the investigation, it is my view that it is appropriate to wait for that report to be made public before finalising the required response,” he said.

“The totality of issues raised by both reports is likely to give rise to significant issues which will require decisions by government, the Queensland Police Service and the Crime and Misconduct Commission.”

The CMC on Monday told the Police Service it intends to take primary responsibility immediately for the investigation of deaths in police custody, under the direction of the State Coroner.