A century’s images of war 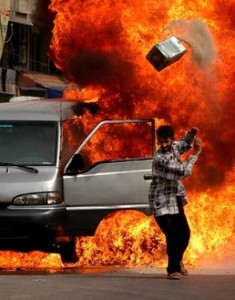 An exhibition at the Brisbane Powerhouse captures 100 years of war through the eyes of the photojournalist.

Degree South: War uses images taken over nearly 100 years to look back, forward and sideways at the events of modern war. The exhibition shows that in the human aspect of combat there is no glory or glamour in war. These images record the impact of battle on all participants, civilian and military and show that under fire and in the thick of it even the most committed soldier’s will face their demons.

The images in Degree South: War are not confined to 21st century warfare. The exhibition includes the Second World War work of George Silk with his famous image of Fuzzy Wuzzy Angels helping a wounded Australian soldier in New Guinea.

Also featured is the work of First World War historian and father of “the photo-shopped image” Frank Hurley. His early manipulation of images caused great debate over his accuracy as a historian and journalist. The Degree South:War exhibition displays Hurley’s famous image titled “Chateau Wood” with superimposed bi-planes swooping soldiers on a French battlefield.

A striking photo from Sarajevo stands out from the rest. It does not have soldiers, death or explosions but shows the true casualty of war. The image is of a deranged child, about ten years old, casually standing in front of a classroom chalkboard with a pistol. The caption tells of the boy, Rocky’s, reaction to the trauma of war; “He was hyperactive and tense and enjoyed playing games of “shooting” random passer-bys (sic) and putting his pistol in his mouth to emulate suicide“.

The exhibition, to run until 30 May, is displayed in the general access areas of the Powerhouse. It is a must see, to experience the sheer power of photography.