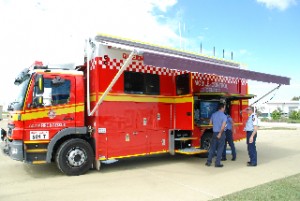 The unit (pictured left) lets commanders on the spot see quickly how a fire is developing, where all their fire engines are, and exactly where streams of water are being directed onto a fire.

It also lets senior officers at the Kedron Brook headquarters see what is happening without officers at the scene taking the time away from managing their firefighters to write and fax reports. The unit was used at a fire at Yatala in April. 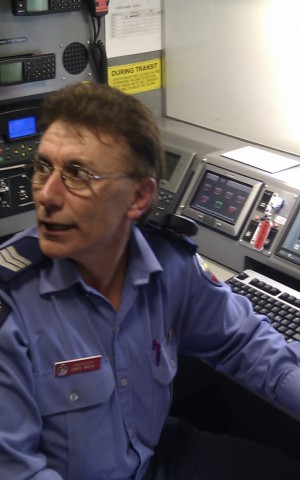 The unit also has WiFi which works up to 400m away if there is a clear line of sight. This means an officer with a laptop computer can see the same information the commanders and operators in the truck can. He also said the unit has military-grade infra-red cameras which can show hot spots underneath the ground.

Senior operator of the unit, Station Officer Gavin Miley, said the unit can communicate with other radio networks such as police or civil aviation. The unit can be used to help show maps of areas where police searches are being carried out, and the infra-red unit can be used to detect dangerous areas after chemical spills.

Station Officer Miley said the unit also allowed firefighters to study easily the way a previous fire had been fought. Every map used during a fire was stored so it could be easily reviewed.

He said the unit’s operators were trained in using whiteboards, laminated cards and paper if the unit’s electronic systems failed.

A spokeswoman for the Queensland Fire and Rescue Service said the unit cost $1.7 million.