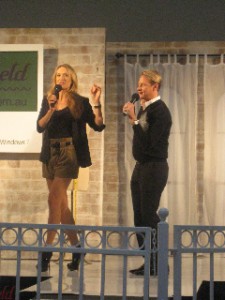 “I love Queensland. I love the people — they are so beautiful,” he enthused.

Internationally known for his television programs “Queer Eye for the Straight Guy” and “How to Look Good Naked”, Kressley was at Chermside Shopping Centre last week where he performed seven makeovers on his Be Styled Tour.

Shoppers crowded into the centre to catch a glimpse of the fashion stylist’s tips on this year’s winter trends.

“I think that you can just take those things that you already have and get a couple of key pieces for fall and winter. You can look like you have a totally new look,” he said.

After selecting seven people from the crowd, Kressley sent them backstage to be made over.

Each of the different looks were inspired by the Victorian era of femininity, with belts and bold statement jewellery.

“I think that a lot of women are afraid to show off their bodies so Victorian pieces are ultra feminine with a nice belt, creates a beautiful shape for all women.”

Kressley also gave a tip on the colours to look out for if you want to be with it: blue and purple are this winter’s trend colours, he revealed.

Patricia Matamua, 19, said she loved the show because Kressley was very entertaining.

But John Kevanga one of Kressley’s security guards said the crowd got a little bit out of control.

“It was really hard to keep the crowd away from blocking the entrance to all the stores surrounding it,” he said.

Kresson stayed for a signing before leaving with an entourage of six security guards.