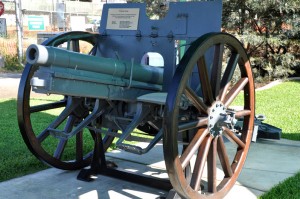 A World War I German Krupp 7.5cm field gun displayed as a trophy outside a Brisbane RSL club.

Police have asked Returned and Services League of Australia (RSL) clubs and other organisations with historic military weaponry to make sure their firearms are properly licensed.

The push comes after police confiscated a World War II machine gun and a wooden replica from Cooktown RSL after finding the club had not fulfilled their obligations under the Weapons Licensing Act.

The Act requires all replicas and firearms produced after 1901 to be licensed. If they are replicas or inoperable they must be examined and certified by police.

Queensland Police spokeswoman Susan Grantham said yesterday they were not targeting RSLs or any specific organisations.

“We won’t be looking specifically at any other organisation as such, but again appealing to all weapon owners to ensure they understand the requirements of the Weapons Licensing Act,” Ms Grantham said.

An RSL spokeswoman said the organisation was complying with the police request.

She said RSL headquarters had notified clubs and sub-branches that all firearms and replicas needed to be licensed and registered with police,

She said she was unaware of any clubs apart from Cooktown that had breached the guidelines.

“We have had no contact…from any sub-branch that they’ve had a problem,” she said.

She said RSL clubs and sub-branches were independently run and operated, and it was the individual clubs’ duty to ensure compliance with the laws.

“If a club has a military weapon, it’s their responsibility to make sure it’s registered,” she said.

Other organisations, including military museums, may also be affected by the push.

Queensland Military Memorial Museum curator Leo Walsh said the crackdown had not affected the historical weapons on display there, as all the weapons were already licensed.

But he said the laws were ambiguous in relation to collectors of historical firearms.

“There are a few grey areas in the legislation,” he said.

A Department for Police, Corrective Services and Emergency Services spokesman said yesterday the Weapons Act was under review in collaboration with shooting clubs and other stakeholders to simplify it and make it easier to understand.

He said the review had been underway for some time as part of the normal process for reviewing legislation, and was not occurring as a result of the current issue with the RSL.