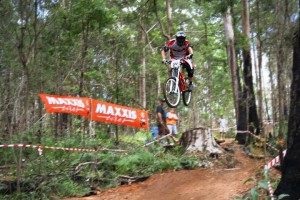 Local and international names were among the top 10 place getters at the first round of a major Queensland downhill mountain biking series last weekend on the Sunshine Coast.

Event coordinator Hayden Lester of the D’Aguilar Range Cycling Club said it was a quality start to the year.

“We are up on the average numbers from previous years, and are expecting around the 200 mark for the upcoming races,” he said.

Mr Lester said the international presence in this year’s series reflected the current climate of the Australian mountain biking scene.

“It’s really positive, and I think it will be a growing trend,” he said.

Cardon, who returns to France next week, said the track was very physical and the competition was good.

Lindsay Klein of Hawthorne placed second, while Brandon Yrttiaho of Forest Lake and Jay Taylor of Indooroopilly placed fifth and ninth respectively, with only 1.5 seconds between them.

Yrttiaho, who won last year’s series in the Under 19s category, said he was excited to be racing in Elite Men’s this year.

Competitors enjoyed fine weather and a sturdy track despite heavy rain the day before, allowing spectators to get close to the action.

The next race round will be at Ilinbah on the Gold Coast on 30 May.

Series’ competitors are aiming for the final Downhill Queensland State Championships, to be held over the weekend of 11 and12 September at Mount Stuart, Townsville.

There will be five races before the championships.

One Response to “Locals shine in downhill mountain bike races”