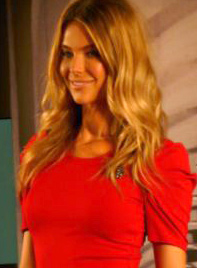 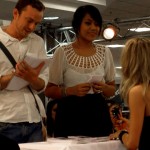 Shoppers crowded into Myer to watch the fashion show, which included plus sized models for the T14 plus size range.

“I thought that the plus sized models up here looked fabulous,” Ms Hawkins said.

The supermodel also commented on her favourite looks and designers for this season. “I’m a really big fan of the thigh-high boot with a pair of casual jeans maybe a singlet and sort of layer it up and I love Manning Cartell I think their collection is beautiful,” she said.

But she was still undecided about the shoulder padded pieces. “They’re everywhere aren’t they, I hope I like them,” she said.

Ms Hawkins stayed after the fashion show for a signing, while fans lined up.